Spanish is Coming Back and "Why We Fight"

Aysha had a good day today. She went swimming in the afternoon with Mom and then out to the park in the evening. We live about a 20 minute walk from a playground. There were two other teachers from the school with kids around Aysha’s age amidst the tens of kids running around. It was b-u-s-y. Parents just sat around and kids were on the loose. Aysha went over and grabbed a beach ball out of another stroller and when I tried to give it back the mom and grandma sent me to give it back to Aysha.

Aysha’s Spanish is coming back too. She has started beckoning us to follow her. Instead of walk over and grab a finger to have us do her bidding, she holds out her hand palm-up and motions to us with all her fingers. At the same time, she says “veng,” which is Spanish for “come.” Also, Karla was telling me about Gabriel (one of the kids at the playground), and how his mother was telling Karla that whenever something falls, he says the Spanish equivalent of “uh-oh.” Well, as soon as the word (which I can’t remember) was out of Karla’s mouth, Aysha said it too.

Her English is developing as well. She is pointing to the family members now and identifying us, “Dada, Mama, Aysha.” Facial features are another fun-to-identify set of words she uses.

Aysha is still carrying her baby around with her everywhere. When I was giving her a horsey-ride, she hopped down in the middle and plopped baby on me. “Mooooore.” After about three seconds of baby’s ride, it was Aysha’s turn again, but she did share a bit.

Here are a couple of Karla's photos of Aysha sporting one of Claudina’s many marvelous hair styles. Every day when we get home she has done something different with Aysha’s hair. Claudina says that Aysha just sits calmly while she puts them in, but Aysha just wiggles and squirms for us. 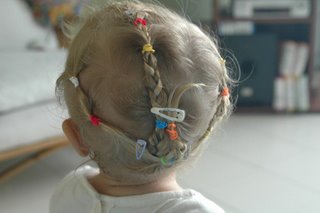 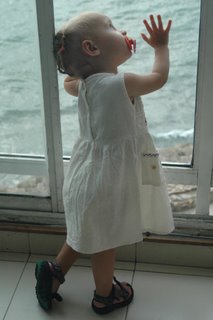 Last night we watched a very well made documentary called Why We Fight. It goes back to a speech Dwight Eisenhower gave as he left the presidency. In it he warned Americans to be weary of the power of the defense industry. The movie then goes on to examine how the defense industry has encouraged war to support its business. It’s nothing new about the current war, but it does give a slightly different interpretation. Wars are not fought for ideas or the necessity of having a wrong to right, but to maximize the benefit to the victors. Well worth your time.