Aysha is the sandal queen. She has fallen in love with her sandals. Usually, before we leave for school in the morning, she finds them and brings them to someone for help putting them on. She wears them all day around the house and cries at night when we take them off her to go to bed.

It's Sunday morning: nap time for Mom and Aysha. Yesterday we went out to the islands with the school. It's the big integration activity. It involves drinking beer and sitting by or in the ocean. For anyone who came to Cartagena and braved the trip out to the islands with us, this trip reminded me why we took you. In August, when we first went out, the water is smooth and the boat roars out to the islands. It's an easy trip when the seas are calm. Unfortunately, in the winter when visitors are here, the seas get all excited and bumpy. 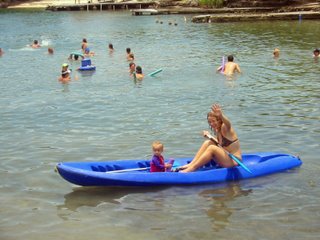 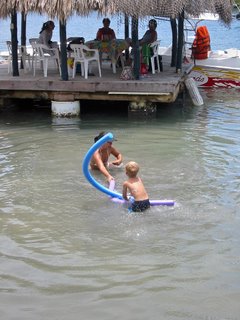 We all had fun, but I am still sore from going tubing.

The latest chapter of Made in America has been describing some of the myth making around the creation of the US. Is was actually a problem filled process whose result instill few hopes of success. Aside from the key figures being drunks, womanizers, avoiders of baths, and all around failures, the founding fathers rarely agreed with one another. The Constitution was widely regarded as too full of compromises to be useful and it was only hoped it would last a few years until something better could replace it. When George Washington was sworn in as President, most of the members of the House and Senate didn't bother to show up. It was a month before enough members of the House arrived to establish quorum and more than that before the Senate could operate.

Now is it pure ignorance of history that lead the US to believe it could set up an effective government in Iraq? Or does the ignorance simple make people's expectations of what kind of government can be imposed hopelessly optimistic? I have been critical of the slow progress of the government forming in Iraq. Maybe it's actually going well. It would seem that the idea that no deal is better than a bad deal is not correct. Who's to say what a bad deal is.