We went to the PTA carnival at the school this weekend. I had to volunteer to work a shift in the morning. Later we went back, and Aysha had her first donkey ride. Actually, she only rode in a donkey cart. Here are a few photos of the event. 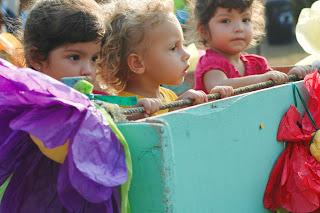 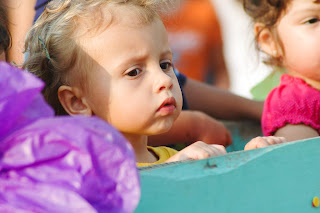 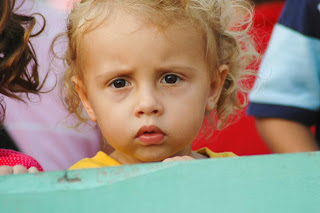 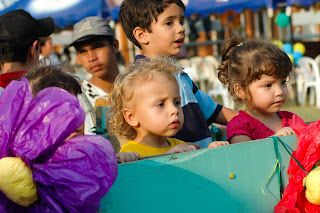 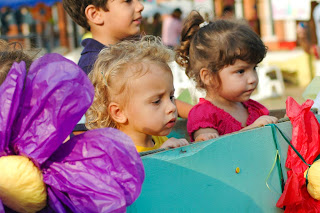 She seemed very concerned about the working of her conveyance. She didn't crack a smile once, but she cried when she realized it was time to get off.

She has been doing well on her potty training. She still has an accident or two a day, but surprises us with self-initiated trips to the potty every day, too. Uncle Jeff arrives tomorrow night and we'll be away from home (but probably not from potty - Everything but the...) for a few days. We'll see how she does.
Posted by Jamie Hide at 9:08 p.m. 1 comment: 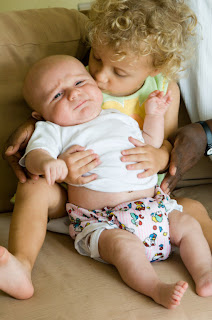 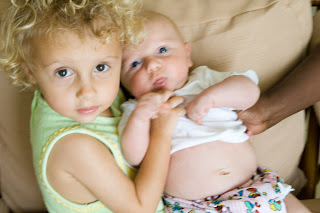 Last week we took Cohen to the doctor for a six week check-up. I had thought he could have his first vaccinations, but it turns out that he has to wait until he is two m onths old. Upon examining him, the doctor said, “Wow, he’s big!” He weighed in at 5.4 kilos (just under 12 pounds) and 56.5 cm. That places him at the 75th percentile for weight and the 50th for height. I’m starting to worry that he has a weight problem!


Aysha has accepted Cohen very well, and insists on kissing him goodnight and on holding him various times throughout the day. There are times, however, when she would like a little more attention than we happen to be giving. Then she points to the baby seat and says, “Put Cohen down!” as she would like to be picked up and played with. 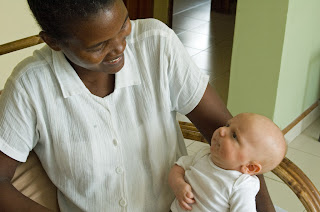 I love my little gordito, but dislike having to cart him around all the time. I definitely prefer the stage when babies begin to walk and talk. I find infant care infinitely tedious and boring. There is not a lot of mental stimulation involved, nor the sense of satisfaction that I get from my paid work. I feel this way even though I am fortunate enough to have someone come in and help with child care and cleaning five days of the week. I have to keep reminding myself that this is a stage that will pass, and in about a year and a half, I’ll have a toddler who says cute things and is able to play independently at least some of the time. I have to remind Jamie of this as well, because he has even less patience for childcare than I do. 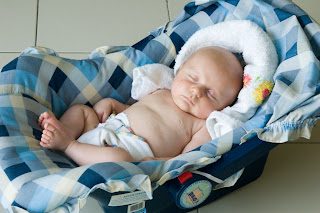 I know I shouldn’t complain. Cohen has been a much easier baby than Aysha was. He has his fussy periods, but generally he cries less and sleeps more. He is even sleeping from five to seven hours at night without needing to eat. I try to get him to go to sleep about the same time as Aysha (around 7:30pm), and wake him again for another feeding just before we go to bed (around 9:00pm), and he generally sleeps until 2:00am, at which time I feed him and he goes back to sleep until sometime between 4:00am and 6:00am.

On Friday I saw his first smile. I was talking to him and his face lit up. It happened again on Monday morning when we got up in the morning and I brought him into the living room and lay him beside Aysha (she was laying on the sofa). As soon as I placed him beside her, a grin spread across his face. I think he likes being near his big sister. Both yesterday and today Cohen has smiled at least once. Seeing him smile helps make the tediousness of childcare appear worthwhile.

To fulfill some of the creative void that has occurred due to staying at home, I have been working on a scrap book of Aysha’s first year. Friends in gave me a Baby Scrapbook as a gift when Aysha was born, but I had completed all of one page since then. I hauled it all the way from to to , with the intention of working on it. Well, now is the perfect time. When Claudina is here, and Cohen is sleeping, I have time to work. It doesn’t take much brainpower, but it does provide an opportunity to do something in which I can see progress. It’s not a work of “art” (I am really a bit of an arts snob, and generally see scrap-booking as a lesser form), but it will be fun for Aysha to look at in the future. I may be persuaded to eventually do one for Cohen as well, just so he doesn’t feel left out, but I doubt I will ever do more scrap booking than that. I can think of a lot of ways to better spend creative energy.

Aside from scrap-booking, I’ve been using my time at home to make doctors appointments and to deal with health insurance issues. The whole family has now been to the dentist. Aysha and I have finished, and Jamie has two visits remaining. I had five teeth worked on (four old fillings were replaced), and Jamie is having seven done. My check-up, cleaning, and other dental work came to about $200 Canadian. Since we won’t have dental coverage in , we decided to get as much preventative work done here as we can. I also intend to have eye surgery done (so I won’t have to wear glasses) and I want to see a skin specialist here too in regard to some strange dark spots I developed on my legs during pregnancy.

Some family members have requested an Aysha update in regard to “chupo”. She asks for chupo every now and again, but it seems more a game, or a way to get attention, than an actual attempt to have us give it to her. When we ask her where it is, she giggles and answers, “In the basura. Chupo – yuck!” She even pretends to cry once in awhile when she is asking. It is one of those fake cries that she uses when she wants to appear more upset about something than she actually is.

Jeff arrives in two weeks. I am excited, and I know Aysha will love having her uncle visit. If we are able to get organized the whole family will go to the national park, Tyrona, just outside of . We’ll see what the doctor says in regard to mosquito exposure for Cohen. Well, that’s the update.

Here it is. Under threat of blacklisting, we (all of us) have been inspired to produce another video of the kids.

Click To Play
Posted by Jamie Hide at 2:44 p.m. No comments:

Yesterday was a big day. Aysha and I went to the dentist. I had scheduled my appointment for 2:30 with the “adult” doctor, and Aysha’s for 3:00 with the children’s doctor. I reasoned that if she saw me getting my teeth checked first, she would then be more willing to have someone else look at her teeth (the girl rarely allows Jamie or I to take a peek at her teeth, and our tooth brush time at our home is a daily struggle). True to Colombian scheduling, the visit turned out nothing like I had planned. The children’s doctor called us into her office early, while my doctor wasn’t ready until well after Aysha’s appointment had finished.

The amazing part of this story is that after the doctor had turned a white latex glove into a balloon, tied it with dental floss, and drew a face on it, Aysha sat perfectly still and allowed the doctor to not only examine her teeth, but to clean and fluoride them as well! I couldn’t believe it! When the doctor said that there was some plaque on the back teeth, Aysha said, “Sucio!” as if she understood everything, and willing allowed the teeth to be cleaned!

The result of the visit? Aysha has no cavities. But she does have an overbite (as Grandma G. suspected), and the doctor says the reason may be the “chupo”. The doctor said that chupo has to go.

I had been talking to Aysha about getting rid of chupo next week, when baby had his six-week checkup. Jamie and I hadn’t done it earlier, because we wanted to wait until Aysha was used to the new baby. The doctor’s orders were motivation to bite the bullet now! We came home and I said, “Aysha, the doctor says that you can’t have chupo any more because it is hurting your teeth. Let’s put chupo in the basura (garbage).” And we walked right over to the garbage and Aysha giggled as she watched me throw chupo in. She said, “Chupo yuck!” and we closed the lid. Claudina then took the garbage out.

Two minutes later Aysha started to cry, “Chupo…” but we explained once more where it was and why, and then Jamie took her swimming at the pool. When she came back and asked for chupo as she was getting out of her swim suit, I explained again, and asked her what would help her to feel better. She immediately responded, “Painting,” so we did some painting and she didn’t ask for chupo again until bed time. There were a few tears when she was in her crib, but not many; she slept through the night, and only asked for chupo once a few hours after she woke up today. I said, “Chupo went in the garbage, remember? It’s gone now.” She giggled again, and hasn’t asked for it since. She even lay down for her morning nap without a problem!

I’m once again in shock. If I had realized that it was going to be this easy, we would have gotten rid of chupo months ago! Or maybe it is only this easy because we waited until now. I don’t know. In any case, our first day without chupo has been miraculously less painful than we’d anticipated. I’m starting to think that Aysha understands a lot more than we give her credit for.