The holidays have left us with lots of time to relax, rest, think about things and plan for the future.

We have decided not to return to Kuwait next year. We have gotten moving this break making plans for next year. Our 'plan A' is to find jobs in Fernie at the private school there, move back to our house, and return to the world of tax-payers who don't have maids. 'Plan B' is to look for international work closer to home. Somewhere in Mexico would be ideal. It is both close and easy to travel to from home. It would be easy for us to get home for holidays and for you all to come and see us. Other possibilities are Central or South America. They aren't as close or easy to get to, but at least they are in almost the same time zone. It makes communication easier and travel easier. For shorter holidays, it would be more practical to go home if we don't have face major jet-lag getting used to the time change and then switching back a week or two later. Down at the bottom of 'plan B' are a few European school. Europe won't have the time zone advantage (though it would be better than Kuwait), but it will have the advantage of ease of travel, probably more than even many Central and South American destinations.

We've also been getting ready for the baby too. The apartment has been reorganized. The crib is assembled and in place. Despite the urban legend, it was easy to assemble, went together with no parts left over, and has not spontaneously collapsed one in several hours of standing. We cleared shelves and set out baby's clothes, toiletries, feeding supplies, toys and a changing station. Soon, I'll be installing the child seat in the car and Karla will be packing her bag to take to the hospital with her. 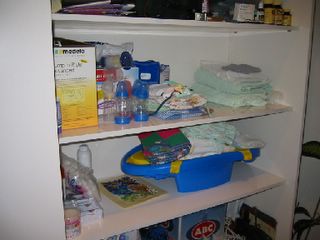 Baby stuff at the ready

Here are a few pictures from our tour of the Mowasat Hospital. We spoke to a doctor about the delivery procedures there and took a quick tour of the rooms, with the camera this time. We'll have an appointment with Dr. Laila next week and go over the birth plan to finalize the plans.

We are a little worried here. We've got a few friends and students that we know of (and probably more that we don't) who are travelling in Asia over the holidays. We only have word that one, Greg, is safe as he decided to go north in Thailand before going south to the beaches. He said that he felt the quake in Chang Mai in northern Thailand. When Karla and I were on Koh Pha Ngan, a island on the east coast, we stayed in a little bamboo hut, only 100 feet from the water. I can imagine what the beaches would have looked like. At ten am, people getting up and coming out of their huts to survey the beach on their way to breakfast when a huge wave rushed past moving everything up land then pulling it back out to sea. So out thoughts are with Beth and John, who went to relax on Koh Phi Phi, and Ibrahim, one of my tutor students whose family went to the Maldives.