We dropped in to see the doctor again last night. Baby is doing well - growing nicely, positioned properly, and squirming frequently. The ultrasound pictures of the face were difficult to take since baby is tucked down in the pelvis. Nevertheless, here are a couple of the baby - the eyes, nose, mouth and pudgy cheeks are pretty clear. (that's a little hand in the second one) 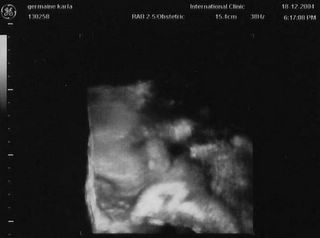 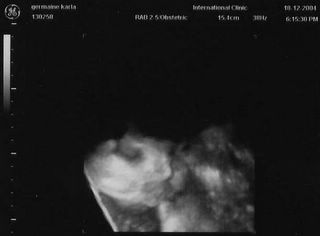 We are finally on the Christmas break. Just before the break, the school sent out the contracts for next year for the staff to consider. It said that the board had agreed in principle to the raises based on the additional year of seniority that everyone would have, but that contracts had been printed without it. It seems the school has hired a consultant to look at the salary and benefit package and his results would be published in March. The school wants to see what their man says. I guess if they can get away with paying less, they hope to sneak it into the already signed contracts. It's absurd.

We got all of our Christmas shopping done in a little more than an hour at an authentic Vietnamese craft store near our house. The basement shop is large and full of products, but not very well marked and always empty. It is staffed by a half dozen friendly and bored Vietnamese women. While chatting, Karla even found the sister of on of the sales staff to do some clothes mending for her. Karla was even good enough to point out what she wanted under the Christmas tree this year.

Otherwise, we have agreed that on Christmas morning we ill swap gift ideas and then discuss the other's idea and make a decision as to what gift we each ought to receive. If Karla wanted some gaudy gold jewelry, Muslim fashions (complete with matching hejab), or bootleg action movies, I'd be on top of it. However, she is not so accommodating.

When Karla gets up from her nap, she has promised to pose for another photo.