Saturday Afternoon at the Pool

Yesterday, we sat out by the pool in the afternoon with Tony, Diana and Julian, and Christian and Sophy. Here are a couple photos from the day. Julian was doing some big jumps into the pool, but quit before I could get the camera. Aysha was being her usual cute self. 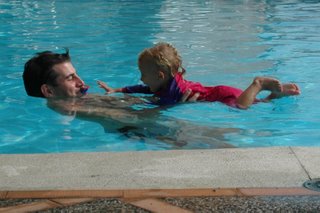 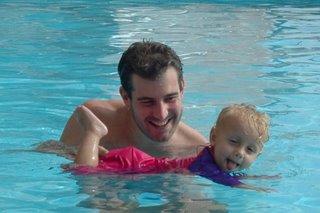 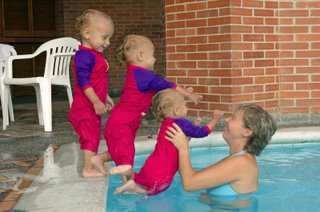 I played soccer at the school yesterday morning too - we moved the game from the late afternoon to eight in the morning, hoping more people would come and the game would be cooler. No one showed up at eight and by the end of the game at ten it was very hot. Next week we will go back to the afternoon game. I am still the worst player on the field, but am having as much fun as the others.

Last night we played a game of Settlers of Catan, which is proving very popular. First we played with Christian and Sophy a couple weeks ago and the next day at work, Sophy told me not to give any of the details about the game to Christian so she could get it for him for Christmas. Right after the game last night, Tony was planning to get the expansion pack so more people could play at once.

At school, progress reports are due on Monday (that means the first quarter is already half over) and so I should get back to work. I just took a little break to put up a couple of pictures.
Posted by Jamie Hide at 9:56 a.m.