Today is Aysha's second birthday. Yesterday, we went to Aysha's first birthday party for the neighbours' daughter Sylvana, who is one year and one day older than Aysha. It was an extravaganza at a little amusement park not too far away. Lots of kids were there and the decorations were amazing. They had a table set up with a wrapped gift for every child who came and another covered with an all-you-can-eat candy bar for the kids. It must have cost a fortune. Even though Aysha could only go on a few of the rides, she had a great time. Here are a couple photos of mine of her on the trampoline.

Aysha inside the protective netting around the trampoline. 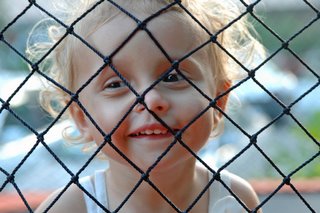 With the help of the trampoline, Aysha can almost get off the ground. 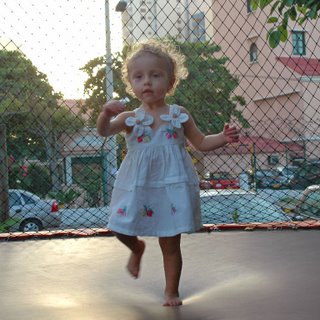 The whole birthday event tires a girl out. 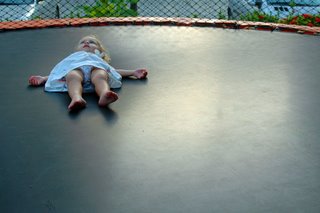 Here is a picture from one of the "kids' games". The object was to follow a treasure map and find a puzzle, then put it together. Note how the nannies (the women in white) are doing the work on the floor, while the kids are coloring. 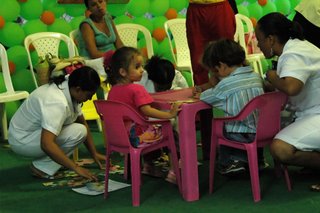 We'll just have a quite day today: a swim and maybe a trip to the park. When all the other teachers get back, we'll plan a little party for Aysha. I'll fire up Skype when Karla gets up for birthday calls.
Posted by Jamie Hide at 7:50 a.m.