Aysha Leanring to Walk (and more)

The is a little video that I made of Aysha from earlier in her walking career. It is mostly footage of her from when my parents, my sister and Dave were here. This one is only two minutes long and about 5mb. After you click the picture you will have to wait a few seconds for the video to start with Windows Media Player. 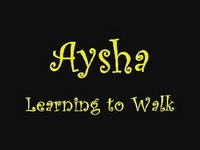 There is more footage of Aysha, but her nap was only long enough this afternoon to put together this little bit. The next bit of the park and playtime at the pool with Gabriel will come soon.

Yesterday, Karla went to a planning meeting for the school and I was on baby duty, alone, for eight straight hours. I don't know if is more amazing that Aysha survived the ordeal, or that I did, but when mom rolled in at 4:30 we were still having a good time. We took two trips down to the pool area for a cruise around. Claudina usually takes Aysha down for a little afternoon walk. When Aysha and I left the apartment, it was obvious that Aysha had the routine down. She walked over to the elevator with her push toy, got on and even turned around by herself so she was ready to get off. We cruised around the patio, Aysha stopping whenever a leaf needed to be picked up. She is pretty good at transferring between her two hands and could manage six or seven big leaves and still push her toy. When we got back, she had a good nap and let me get some work done. When she woke up we did it all again.

Today, the art teacher, Patricia and her son, Gabriel, came over for a play date. Gabriel is only 10 days younger than Aysha. The two of them didn't do too much playing together, but they played beside each other without any problems. Gabriel had all Aysha's toys to play with and Aysha alternated between watching him play and eating pita bread. She's got quite an appetite these days.

Well, the video has been uploaded so this post should be ready to go as soon as I click the button.
Posted by Jamie Hide at 6:02 p.m.