Sorry it's a day late. Karla's feeling under the weather with a cold, so photo taking was delayed. Ramadan officially began today. Karla napped and corrected. I watched Kill Bill, one of the films left us by a teacher last year. It was awful. Tomorrow school starts two hours late - which is good for sick mamas. Karla has a light load tomorrow (I have already been encouraging her to stay home and get well), so she says she will go in tomorrow. Hopefully, she'll take the day off on Sunday if she isn't feeling better. Anyway, I should be getting to bed soon too. And here's the photo. 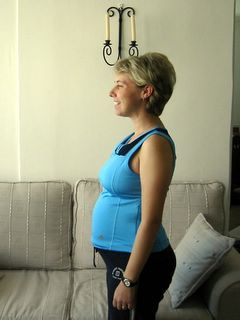 Last weekend we tried to watch Super Size Me, which (I thought) I had been clever enough to download from the internet and copy onto a DVD. I mostly worked. The audio track was flawless; however the video track ran at double speed. I tried to watch it, but it was too hard. You had to pay attention to the audio and at the same time remember what was happening on the screen (because the audio would be coming in a while) AND remember the scenes that you had seen a few minutes ago that corresponded with the commentary that was currently playing.