The trip has a rough start. With the uncertain situation in Kuwait, we had made several contingency travel plans: home, Oman, Sri Lanka, Thailand, Italy, we even looked into going to China! By the time the vacation was near, we argued about who had to call the travel agent to request a change, we were both sure she hated talking to us because it meant making another booking that we had little chance of using or trying to meet another of our requests.

Then on Monday, the US Embassy finally issued the ordered evacuation that would extend the holiday and provide financial assistance for the teachers to travel. By the middle of the morning, the principal had come around to ask if we wanted our flight home or cash in lieu. Since we already had our booking to Thailand (and it was already looking like it might be tight getting out) and we though the break would likely be brief and we would be back to school in a couple weeks, we opted for the cash. We would continue on salary, plus the school would give us money for the price of a ticket to Canada to cover the cost of our ticket to Thailand, plus a few dollars for spending money.

However, just as we got home and were about to go pick up our ticket, the director of the school called to let us know there had been a misunderstanding. He told us that teachers who took the flight home (or cash in lieu) would not receive the bonus that the school had previously offered to teachers who stayed and worked while the school was open. Up till then, he had promised that if the evacuation happened to coincide with a holiday, that teachers might claim both, as long as they didn't miss any days of school.

With our disappointment and mistrust of the school beginning to grow, we picked up our ticket and were ready to go. When school ended Wednesday afternoon, we hurried home and picked up our bags, locked up and headed out to the airport. We arrived half an hour before the counter even opened and joined the mob to wait. There were six flights to Cairo that were delayed and all their passengers with all their belongings (including at least probverbial two kitchen sinks from the size of the mounds of luggage) occupied any floor that wasn't dedicated to the mobs that were waiting to check in. After an hour of pushing, jockeying, shoving, elbowing, and the telling off of one Kuwaiti woman who "just needed to talk" to the counter agent (along with her four tickets and passports, mind you), we had our boarding passes in hand and were headed through to the lounge.

We were left in the line to board for a nervous hour, and finally, we were off. By the way, keen observer that I am, I noticed that they will not serve beer until after the plane has taken off. Thai Airways was comfortable enough and popped us out into Bangkok the next morning. By the time we arrived at our guest house in the centre of Bangkok, the bombing had begun in Iraq. After a little nap, we headed out into the streets to see all of the wonders Bangkok had to offer.

We stayed along Khao San Road, the backpackers headquarters in Bangkok. 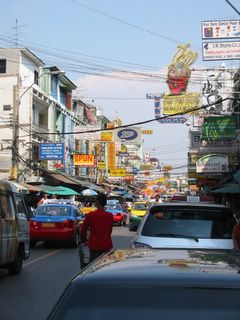 The streets are lined with bars, restaurants, travel agents and shops selling everything from Thai handicrafts to used books to knockoffs of brand-name everything. It was a typical city in a developing country. The streets and sidewalks teemed with vendors to the point where it was difficult even to walk down them. When the police arrived, the vendors on the street packed up instantaneously and hurried around the corner.

We spent the first two days kind of decompressing from the rigours of staying in Kuwait until the last minute. But at the same time, we stayed in touch with the situation there. I felt fortunate when I watched the empty streets of downtown Kuwait as the first of the air raid sirens went off. But I also felt sad for the people I knew who could not afford to leave even if they wanted to.

We visited the temples and palaces around the old city. Thailand has never been a colony. Some of its buildings reflect the arrival of Europeans in the area, but there are almost no entirely colonial or European buildings. 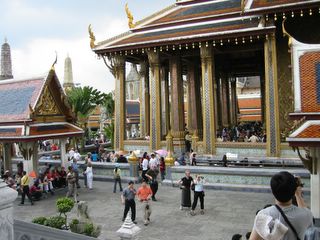 There is a definite Thai architecture. Statues teem and the roofs sparkle with coloured glass mosiacs. 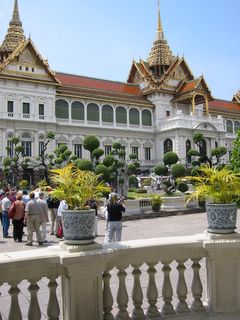 Temples house the usual collection of numerous and/or enormous Buddhas reside. For a religion that strives to eliminate desire for worldly things, the temples certainly reflect a bigger and more is better attitude. 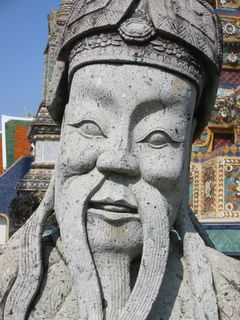 Bangkok is a test even for the seasoned traveller. In our ten minute walk to the palace, we were approached twice by seeming passersby who just wanted to let us know that the palace as closed until the afternoon due to a Buddhist observance when was open all along. And that sort of helpful deception continued. At first it was surprising, then funny, but finally it just made us want to leave.

The national museum is immense, well designed and signed. 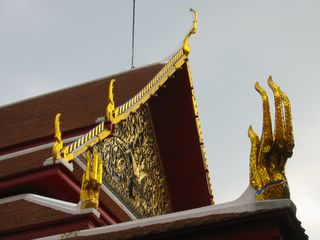 After 45 minutes we found ourselves only partway through the first of its almost 40 buildings. The museum is as if someone took a university textbook covering the complete history of Thailand and turned it into maps, videos, dioramas, models and artifacts to accompany the pages of writing. We gave up on watching the videos and trying to understand the history of Thailand to just look at their loot.

After two days of the bustle of the capital, we boarded a second class sleeper train to for the north. We chugged out of the station on time in a clean and comfortable car. About an hour into the trip, the attendant came and efficiently turned the seats into beds (and even made the beds for us). We climbed up (the bottom bunk tickets were sold out) into our beds for the night. 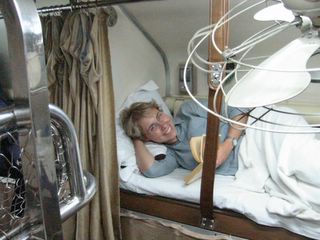 The ride would have been entirely wonderful, if it weren't for the a/c being left on full blast all night. By the time we arrived in Chaing Mai, most of the passengers were huddle in their seats trying to keep warm.

Chiang Mai is a wonderful small city. It is the capital of the north and the center for a booming trekking industry. There are tons of restaurants and hotels, even an Irish pub (run by an Australian, which apologized that Thailand was out of Guinness). But the city has not developed that attitude that usually accompanies tourists. The city also has hundreds of temples 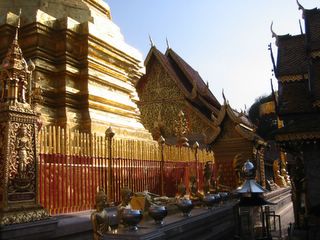 and a strong artisan community (both traditional and contemporary). 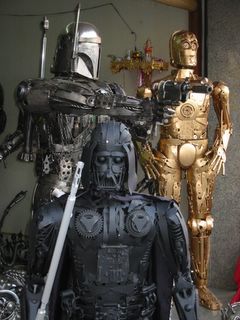 People were friendly and helpful (and honest), and prices were very reasonable. We even felt safe enough to rent a little motorcycle to tour the city.

Karla fell ill after a night in the icebox/train. While she recovered (then shopped), I went on a overnight hike to see one of the "remote" hill tribes. The walk was easy and the village was far from remote, but my fellow hikers were a fun group. The Thai government, in an effort to improve the standard of living of the mostly fruit farming (and occasionally opium growing) people have build recreation centers and schools. The village we visited had a ping-pong table, soccer field and a court to play the local sport, a combination of volleyball and hacky-sack, all build around the school and the solar-powered community TV. That evening, we played a pick-up game of soccer with the village kids. When we left the next morning, the kids were all grouped around the TV.

We left Chiang Mai for Ko Pha Ngan, a small island in the Gulf of Thailand whose remote location preserves its quiet pace. After 24 hours of travel (overnight train, internal flight, 2 hours on a bus, three hours on a ferry and 45 minutes in the back of a pickup truck along rutted dirt road) we arrive and took up residence in our own little bamboo hut on the beach, complete with private bathroom, fan and mosquito net. 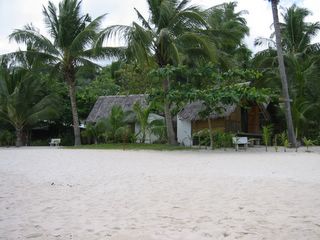 The beach was practically empty. 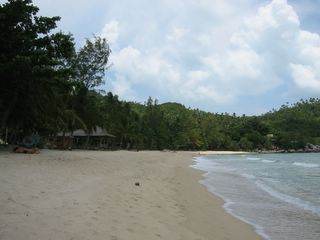 The nearest neighbours were at least 50 feet in either direction. There was breakfast, lunch and dinner and beach. If we made it to all three meals, it was a busy day. The town was a strip of simple hotels and restaurants. On our second day the German couple that we rode the truck to our hotel with invited us to a fundraising dinner for the local school. When we arrived, even before we had reached the food stands, we heard our names and looked into the crowd to see a friend from Kuwait. It turned out that Dave was installed at the beach next to ours.

The next day we walked over the hill and down to the next beach to visit. The town wasn't quite as quiet as the one we were staying at, but we decided to move over to join Dave and a couple of other teachers from another school in Kuwait that were staying at the same beach. We had someone to commiserate with when the missle hit Souk Sharq in Kuwait city and the schools still called us back for the next week.

After a few days on the beach, we headed back to Bangkok. We debated staying on longer, and left in mid-debate. We had flight reservations that we decided to keep. I hoped that we would still have the holiday extended by the school before we left. We arrived in Bangkok with two days before we had to get on a plane to return to Kuwait. We avoided the tourist alley we stayed in when we first arrived in favour of Siam Square, an area near the university where we would see more of the "real Thailand".

Siam Square is home to several embassies, almost as many Starbucks, at least two of every fast-food restaurant and two 7-11s on every city block. It was almost like being back in Kuwait. We enjoyed, The Hours, the first real, uncut movie we had seen since we left and called our director with a few questions about going back.

On the day we left, we took the train to the airport and dropped off our bags then continued to Ayuthaya, the ancient capital of Thailand. 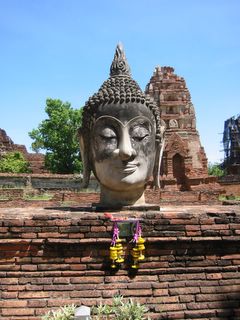 Even though it has never been a colony of anyone, it has been sacked by the Laos, Burmese and Khmers. All that is left of the ancient city are extensive ruins of temple and palace foundations with a few towers and walls standing. 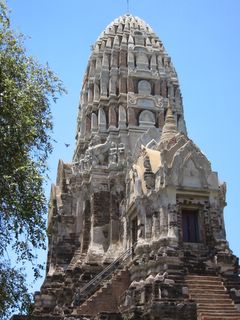 By the time we boarded the plane, there were 7 Kuwaiti teachers standing together in Bangkok. In the boarding lounge in Dubai, we numbered 30. No one was really happy to go back, but we had all decided for our own reasons that it was time to go back.
Posted by Jamie Hide at 1:47 a.m.